The struggle for survival continues for one of Georgia’s most fragile and endangered species: the loggerhead sea turtle. The female loggerhead comes ashore to nest May through September. Nests are marked and often protected with screens to help reduce predation of the eggs. Hatchlings occur 60 days later and the young turtles scramble to sea. Adult female loggerheads normally nest every second or third year.

Cumberland Island, Georgia’s southernmost barrier Island, tends to document the most loggerhead nests each year. Each nest has about 100 eggs. Out of the one hundred eggs, only a handful ever reaches maturity. The turtle is a type of creature which produces many babies and leaves them to fend for themselves, as opposed to other creatures, like horses, who have a small number of babies and protect them until maturity. This method obviously serves loggerhead turtles well, because they have been around since the time of the dinosaurs. However, in the presence of an active threat such as Cumberland’s wild hogs, the low survival rate of turtle hatchlings places the species at risk. A loggerhead’s typical life span may be 50-60 years.

Campers and hikers visiting the inland part of the Island can have delightful bird-watching experiences throughout the year. There is a large population of wild turkeys and dove, and great horned owls ply the forest before dawn.

During the day, pileated (crested) woodpeckers and redheaded woodpeckers are easy to spot as they swoop from tree to tree and hop along the tree trunks in search of insects. Warblers and other songbirds also enjoy Cumberland Island’s protected forests. Peregrine and other falcons can be spotted migrating in late October and November. Other birds of prey that can be seen on Cumberland are the magnificent ospreys and an occasional bald eagle. Both species have nested on the Island. In the marshes and along the creeks, snowy egrets, great egrets, great blue and little blue herons and small (and not so common) green herons can be easily watched as they feed on aquatic life.

The dramatic wood storks are also a joy to observe with a wingspan of approximately five and one-half feet. White pelicans can occasionally be seen on the spoil banks along the St. Mary’s River coming to the Island. Formerly an endangered species, the brown pelicans along the Atlantic coastline have made a dramatic recovery. They can be seen primarily on the beach, although they also feed in the rivers on the western edge of the Island. White pelicans feed by scooping fish when swimming, while the brown pelicans make dramatic plunges from the air for meals.

Out on the beach, the bird life is very lively. Year-round residents such as the oyster-catchers and ring-billed gulls share the surf with semi-palmated plovers, royal terns, laughing and black-backed gulls—and lots of sandpipers. In winter, rare purple sandpipers can be seen singly or in pairs on rock habitats and around pilings. On calm, clear days, rafts of scoters, small, dark-colored diving ducks, can be observed floating contentedly on the water near the shore. 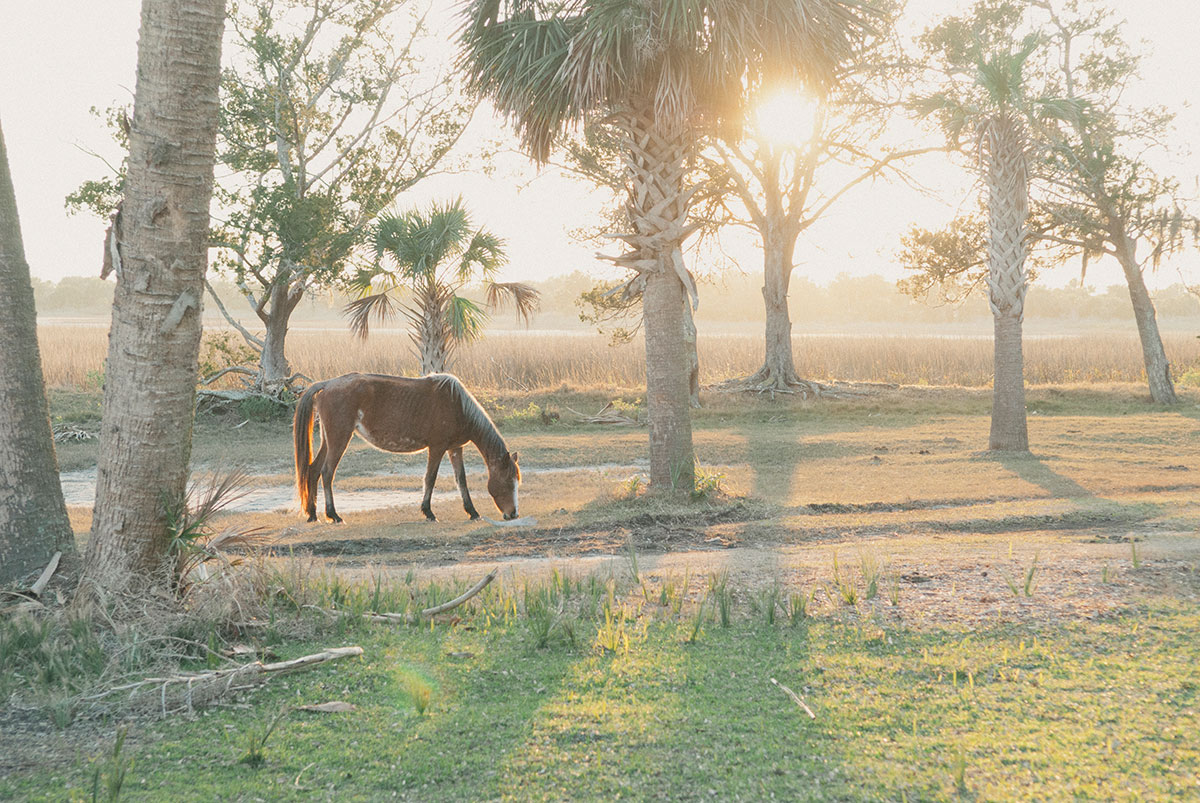 The horses which roam freely on Cumberland are feral, meaning that their ancestors were once domesticated. Legend has it that they were originally brought to the Island by the Spanish. However these particular horses’ ancestors arrived, they make a very pleasing vista for the visitors of Cumberland. They are one of the most sought-after sights by visitors coming to Cumberland.

Scurrying around the underbrush can be seen an occasional armadillo. The armadillos arrived on Cumberland within the last thirty years as a part of their migration from the American West. They make small holes in the ground with their noses as they are feeding.

Feral hogs also may be seen on Cumberland. They are much more destructive than the armadillos on the undergrowth of the Island, and compete with the deer and other large animals for foliage. For a number of years, the National Park Service has had a hog eradication program underway in an effort to control the hog population.